Swatting is the harassment tactic of deceiving an emergency service into sending a police and ... The term derives from the law enforcement unit "SWAT"

A teenager who rocked the US intelligence community when he tricked his way into top officials’ accounts in a campaign of “cyberterrorism” has been locked up for two years.

Kane Gamble, 18, founder of Crackas With Attitude (CWA), admitted targeting high-profile figures such as the then CIA chief, John Brennan, and his wife, and the FBI deputy director, Mark Giuliano, from his family home on a Leicestershire housing estate.

Between June 2015 and February 2016, he accessed email and phone accounts to get his hands on “extremely sensitive” documents on military and intelligence operations in Iraq and Afghanistan, the Old Bailey was told. 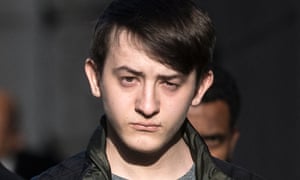 He said Gamble had “revelled” in the attacks, adding: “This was an extremely nasty campaign of politically motivated cyberterrorism. The victims would have felt seriously violated.”

Gamble had bragged at one point: “This is so serious I’m fucking shaking. This has to be the biggest hack ever.”

He impersonated his victims and tricked call centres at communications firms Comcast and Verizon into divulging confidential information.

Gamble taunted them, using a TV in Johnson’s family home to post the message: “I own you.”

He boasted about calling him, saying he had “shreked him”.

He left a disturbing voicemail message for Johnson’s wife, Susan DiMarco, asking: “Hi spooky, am I scaring you?”

Giuliano’s passwords were reset and he and his family were bombarded with phone calls, resulting in them getting police protection.

Gamble leaked some of the information he gathered using various websites including WikiLeaks.

Holdren was harassed in a “swat” attack, when a hoax call was made to local police resulting in officers going to his home.

Gamble, who was aged 15 and 16 at the time, was supported by his mother when he appeared at the Old Bailey.

He said: “So many of the American witnesses attest to a drop in confidence in the use of portals, many of the agencies withdrawing their contributions, reducing the effectiveness in the wider law enforcement community in America.”

William Harbage QC, mitigating, said Gamble had a naive response to what he read about in online chat rooms.

“In a naive, immature and childish way, he thought he could do something about it, he could make a nuisance of himself by targeting people in America and that would somehow get them to change US policy as a result of what he was doing from his bedroom.”

He said Gamble never meant to “harm and traumatise people on an individual basis”.

Harbage added: “When members of the families were brought into it, he did not think through the consequences. The thought seems to have been: ‘I want to grab attention of the US government and getting the families involved is some way that will grab attention even more.’”

Harbage argued for a suspended sentence, saying Gamble was due to sit GCSEs in June and hoped to read computer studies at university and pursue a “useful” career.

Gamble, of Coalville, had pleaded guilty to eight charges of performing a function with intent to secure unauthorised access to computers and two charges of unauthorised modification of computer material.

The judge also ordered the seizure of Gamble’s computers.